Lucca Comics is the largest comic-con in Europe and arguably one of the three or four most important events of this kind in the world. It started as a niche, nerdy gathering hosted in a parking lot, only to grow so much that the old town hardly holds the average 100k daily visitors inside its walls.

It’s a very peculiar mix between a publishers’ faire, a gaming convention, a cosplay gathering and a classic comic-con with international “A-list” guests: all in the unusual setting of an ancient town with a medieval look, dungeons, old walls and green areas blended with the yellow and orange colours of Autumn. And a crazy, totally unpredictable weather.

Cosplayers are pure gold for the shy photographer

My first time in Lucca was in 2012: when I started to reconnect with photography I thought it would be an ideal destination for a shy photographer who wanted to include more the human figure into his pictures. I was quite right.

Cosplayers don’t just agree, they crave for their picture to be taken: it’s an acknowledgement of their work. They are welcoming, kind enough to give you all the time you need, very forgiving and they often know exactly how to pose (and gladly follow your directions if you plan to give them any).

Rejection in Lucca is just not part of the equation. Everyone is polite and happy.

As an annual event with more or less the same audience and the same characteristics, Lucca gives me a year-over-year check on my approach in an almost experimental environment – which is quite weird.

END_OF_DOCUMENT_TOKEN_TO_BE_REPLACED When I re-joined Instagram few months ago after a five years long gap, I didn’t know exactly what to expect. I started following people randomly, according to few mostly unconscious rules: contrasty black and white (or interesting use of colour), urban/street photography, good composition and geometries. In less than one month, I had unwillingly selected most of who are still among my favourite photographers – not just on Instagram but generally speaking: people I now follow on other social media, whose personal website I’ve browsed and for whom I’d book a plane ticket to attend an exhibition. In this, Instagram was indeed a surprise.

The very first one of these people was Craig Reilly.

After him, it was a matter of days before I discovered the rest of the Street Photography International Collective (→ website): Alan Schaller, Walter Rothwell and, last but not least, Emily Garthwaite. And it was love at first sight.

After my first timid attempts at street photography last Summer – at the cost of an incredible amount of stress – I retreated to more comfortable experiences. It was an interesting year but my push was fading, comfort was increasing too much and as a result I fell in total lock down. I needed a spark and couldn’t find any. In the meantime – as I often do when I’m in lock down – I kept devouring images (and, inevitably, SPi photos).

When I discovered that a workshop was planned in London for those very days when I was supposed to be around, I joined immediately. I’d never attended a workshop before (nor I received any “formal” photography education) and I tend to be uncomfortable in unpredictable social situations: joining was an impulse, an internal voice telling me: you need to catch this train now.

Here is how it went, why this was the best thing that could happen to me and why you should really keep an eye on their next workshops.

END_OF_DOCUMENT_TOKEN_TO_BE_REPLACED

The most common advice given by photographers (and creatives in general) is probably: “Get out of your comfort zone”. I’ve seen it countless times on blogs, books, interviews and articles. It’s difficult to disagree with this statement, whose implications are largely obvious. Nevertheless it may raise some issues.

This is how many of us would depict it:

Getting out of our circle of safety forces us to access unexplored areas and experiment with techniques, styles, tasks, interactions. To do so, we usually identify a specific goal and/or give ourselves a self-assignement. In my case for example, I identified the lack of the human figure in my photos as a limit and decided to experiment with street photography. I went out more, walked around the city, dared to shoot when I usually wouldn’t. It worked, for a bit. Then it didn’t work anymore: I felt less and less motivated and at some point I discovered I was photographing monuments more than people (in my defense, it’s easy to be distracted when you live in Rome).

The fact is, sometimes we think we are working as in picture 1, while this is how things are actually going:

END_OF_DOCUMENT_TOKEN_TO_BE_REPLACED

This was supposed to be the first post in a series, covering in english the first year of monthly assignements for BombaCarta. Unfortunately, I was devoured by a number of issues and time constraints, so I couldn’t keep up. If you can speak italian, many reports about the year 2016-17 (including assignements and workshops) are on BombaCarta‘s website. This assignment was given on November 2016 and terminated on December 2016.

Choose your medium carefully: you will stick to it for the whole year. For writing and photography a clear path will be provided but you are encouraged to experiment with any other form of art as long as you accept the duty to “translate” the assignment accordingly. Some forms of art work better in a group: if you have one, you could consider cinematography or dance for example. This is less obvious and more challenging as it may seem: if you do it, I’d love to know how it goes.

END_OF_DOCUMENT_TOKEN_TO_BE_REPLACED 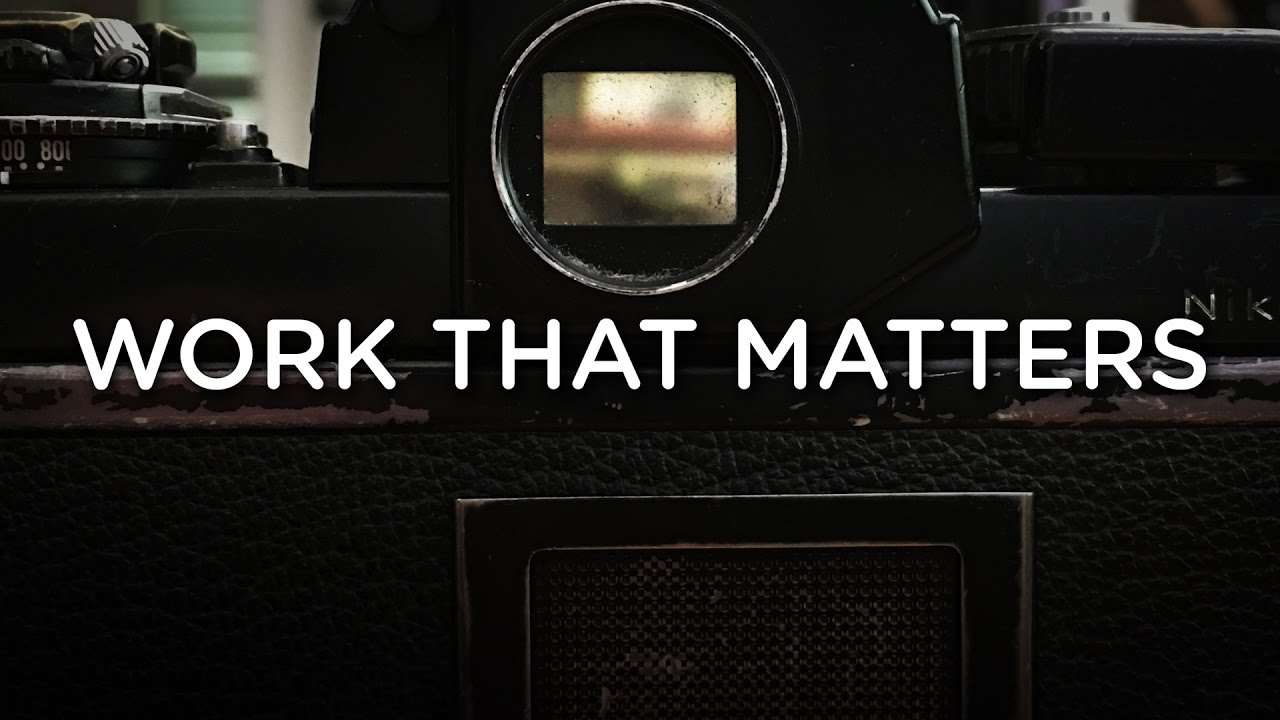 Note: this post has been edited a few times. Being featured on a channel with over 250k viewers puts some pressure and – while I felt the urge to write a reply soon – I needed more time to process the whole thing.

When you casually drop a line on the Facebook page of one of the most popular YouTube channels about photography, you don’t expect to be particularly noticed. Even less you expect half an episode to be focused on your question, but this is more or less what happened last week.

On his page, Ted Forbes opened a Q&A thread and his follower Robert Kennedy asked:

How do you know when you’re creating work that matters? Can we judge a photograph by the amount of interaction it gets on social media? What merits a truly exceptional photo? I want to keep pushing myself and my photography but to do it in a constructive way that will help me grow as an artist and perhaps inspire some other people along the way. Thanks for all you do.

Since Forbes is a creative guy with an interesting perspective on things, and since I’m struggling to find the right balance between a relevant online presence and the need to keep my focus on what’s important, I endorsed his question adding what follows:

+1 on this one. It’s hard to escape the equivalence “more likes = better picture” but it’s also hard to get valuable feedback outside of this logic.

END_OF_DOCUMENT_TOKEN_TO_BE_REPLACED

In a video on his YouTube channel, Ted Forbes launched the first of a series of assignments. As an avid follower of his videos, I decided to join. The topic is “Variations”, the assignment is to take ten shots at the same scene. This is how it went.

END_OF_DOCUMENT_TOKEN_TO_BE_REPLACED I’m writing less because I’m shooting more. This is good news. Here are some shots from my last walk.

END_OF_DOCUMENT_TOKEN_TO_BE_REPLACED

There’s something that has been haunting me for a while.

Few weeks ago, the father of a four years old child’s suffering from a terminal neuroblastoma – Jessica Whelan – published a photograph of her daughter at the peak of her suffering. Taken in a moment of helplessness, the photo was subsequently used to raise awareness about cancer and to fund a campaign in order to bring Jessica as much comfort as possible.

As a doctor, suffering and death are not strangers to me (even if – as a psychiatrist – death is a rare occurence in my practice). I’ve seen pictures of people feeling seriously ill or even dying, but I often felt a sense of discomfort: in too many cases through the image of a dying person I saw the suffering of the photographer rather than the subject’s and I am sligthly disturbed by the (completely understandable) intrusion of the author’s ego (his need of processing, a bit of exhibitionism, his cry for help) into such a personal space.

There is a sense of absolute pureness that made me connect with her struggle, singlehandedly wiping away any possible resistance on my side. The power of this photograph trascends its formal purpose: it doesn’t raise awareness on cancer, it doesn’t show a family’s suffering, it doesn’t teach anything. This picture takes me where I don’t want to be and keeps me there, asking questions for which there is no answer and feeling a pain I don’t want to feel. And despite all my efforts, I cannot escape.

This is the power of a perfect picture, one I should aspire to take once in my life and one I hope I’ll never have the chance to take.

Jessica died earlier today and her picture is still walking with me – it will for a long time.

Experienced photographers often tease amateurs because they would do anything for the latest and possibly most expensive camera, chosen after a careful, methodical comparison of all the technical details. After a recent and widespread brainwashing, most people seem now to agree that pixel count is not so relevant (the fact that 24MP cameras became relatively cheap helped a lot), but only to move the discussion towards similar topics like gaining a stop of speed, 5-axis stabilization, vignetting, fps burst, 4k video. And that subtle purple fringe that appears on the edges while shooting towards the sun – isn’t it outrageous?

Fun fact, experienced photographers often use equipment valued around 10.000 €/£/$ and it’s hard to believe that gear doesn’t matter when you’re told so by some bloke holding a Nikon D5 with a 70-200mm f2.8. Maybe they should just say: “gear doesn’t matter so much“, it would be less disorienting.

END_OF_DOCUMENT_TOKEN_TO_BE_REPLACED

Tomorrow I will be talking about why photography is the perfect medium for interpreting the struggle of creativity in Arts, in the first meeting (“Officina”) of the year 2016-17 of “BombaCarta“. Part of this topic was covered in my last post, I’ll provide more examples and some other thoughts.

You can read an introduction here (in italian).

[Update] You can find the slides I used for my speech on slideshare or download the pdf (in italian).

This blog will not be updated anymore: its content has been moved to https://cgaston.me/brani/.